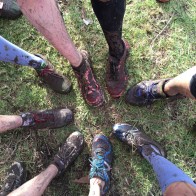 This year the State Cross Country Championships were held from the renowned Nowra venue to Dapto, a new purpose built Cross Country course. However drama unfolded before the race had even begun with a week’s worth of heavy rain causing the possibility of a cancellation of the event.

The morning of the race the sun shone, so the race continued which saw runners greeted with a course that resembled that of traditional European Cross Country courses, rather than the manicured courses many Australian runners are used to.

Mud, mud and a touch more mud covered the course as runners covered a 2,3 or 4km loop.

Team AE was well represented across both male and female competitors and for the first time in quite a while our Men’s Open team was up the front battling for podium contention in the teams.

Veronica Chan Debuted for AE in her first State Cross Country Championships in the Under 20 women’s 6km and found the course challenging, taking a small dive down a very muddy, slippery and steep down hill section. She regained her composure to finish the race in 13th position.

The Women’s Open team was strong in numbers with 10 ladies starting (and finishing). Lisa Biffin (16th) led the girls home despite complaining for most of the race about the mud, Gill Sohun (20th) continued her amazing season cracking the top 20, closely followed by Rebecca Holmes (23rd) and Jane Boyd (25th). Most of our ladies team found themselves on the podium for age group medals and the Open Ladies team came home with a Bronze.

The final race of the day saw the Open Men battle the 12km course which was heavily chopped up and very challenging. Our men’s team is showing some great talent and is proving to be competitive against some of the larger clubs. The conditions suited Kevin O’Brien who led the boys home to finish an incredible 15th in his first NSW State champs. James Costello (24th) and Mark Gregory (30th) were not too far behind as was track and triathlon specialist Braedon Jones (31st) who tested his talent across his first Cross Country.

The Men’s Open team finished with a Bronze medal which was an amazing effort given the strength of the field and our men’s teams have struggled with numbers over the past couple of years. Looks like some great things to come from this talented bunch.

Finally a big thank you to Heather Bolton who ran in the Open team helping the girls come away with a Bronze Medal instead of racing in her age group which would have seen her walk away with an individual Bronze.