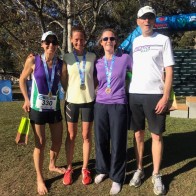 A spectacular winters day saw the AE runners turn out in force to support the club. It was important for the club to field the teams to try and maintain/extend the lead in the age group premierships.

The AE involvement kicked off in the O’50 race with Paul McGuire making his winter debut for 2019 and he showed great discipline to record pretty even splits for his 4km run.

Next up were the Open, O’30 and O’40 runners. AE were only involved with the latter two events and the guys packed in well to finish 2nd in the O’30 and 1st in the O’40 teams.

Hot on the heels of the Men’s event were the Females in the same 3 age groups and AE had no problems dominating the O’40 event.

Last athlete on the course was Leo Ford, who at only 11 had to run with the U15’s as he couldn’t get there in time for his own age group event. Leo performed well and will be great to see him race with his own age group.

All athletes executed almost perfect runs in every case, a pleasure to see and outstanding for the club.

The pointscore for the ANSW premiership is as follows: