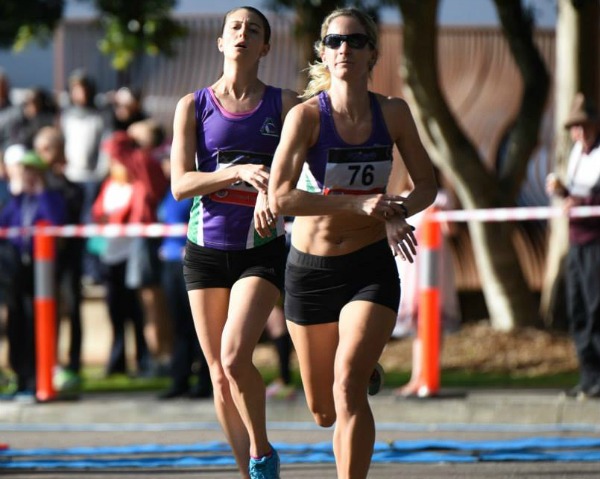 Team Athletics East ventured to Ourimbah for the State 4x4km Road Relay Championships.  The rain was long gone and a beautiful, fresh afternoon greeted the runners making the conditions perfect.

Our men’s team was the first to set off for the afternoon over the 2x2km loop circuit with Kevin O’Brien leading the boys out.  Kevin has been in fantastic form over his maiden winter with the club and flew around in 12.30 amongst a very competitive field.  Braedon Jones was the next runner out and the first time on the course running a very respectable 13.20.  Mark Gregory was the men’s teams 3rd runner and a Cross country regular passing the baton over to Campbell Dawson after running 13.51 for his leg.  Campbell was promoted to the men’s A team and held his own running comfortably under 4 minute km’s (15.08) to anchor the boys home in 7th position.  A great effort by our men’s team in a very competitive field which featured Olympians and some top National level runners.

Unfortunately our men’s B team was unable to field a full team despite Jude Gregory stepping up and offering to run twice.  However this still allowed Greg Krawczyk a chance for his maiden race over the distance which he completed in a very handy 14.53.  All the athletes were also able to cheer on Coach Peter Good, who is usually on the sidelines cheering us on.  Pete ran for the first time over the course and from all reports was still standing and smiling after!

The ladies were the last race of the day and they continued their recent trend of fielding lots of teams thanks to the growing number of female members.  The ladies A and B team had stiff competition with large numbers of teams entered however both teams performed exceptionally well.  Our ladies A team found themselves back on the podium coming home with a Bronze Medal behind two very strong teams in Randwick Botany and Sydney University.  Lisa Biffin led the girls out and was pleased to be back on the road and out of the mud and set a new course PB of 14.41 in 4th position. Rona Macniven (15.33) set off next in chase of the Bankstown team and ran them down to place the girls in 3rd position.  Emily MacKenzie ran strong and consistently in 15.49 passing over to Gill Sohun who anchored the girls home in a huge PB of 15.45 to continue on with her very impressive season.

The ladies B team showed that consistency can be the key in team events.  Three of the first four runners, Lorna Santry (17.03), Alice McKenzie (17.34) and Nicole Berridge (17.35) all ran within 30 seconds of each other showing the team training is paying off for all girls with Rebecca Holmes anchoring the girls home to 7th place, with a fantastic run of 15.56.

A race report would not be complete without mentioning our Ladies 45+ team.  Rarely defeated this season these ladies are going from strength to strength with them taking out the GOLD again.  Jane Boyd had a stellar run, falling 1 second shy of her 2012 pb, opening with 15.31.  Jude Gregory took over the next leg and despite having already run earlier in the day ran a new pb of 16.06.  Heather Bolton continued the run of PBs setting herself a new 4km pb of 17.11, passing over to Sally Lynch who brought the girls home with the gold in 16.32.

A special mention is to go to both Kevin O’Brien and Lisa Biffin who set new male and female club records over this course (12.30 and 14.41).  Congratulations!