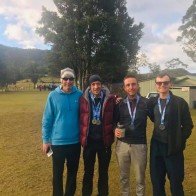 A beautiful winters day saw a small band of AE athletes venture south for the annual Long Course CC Champs held on the Willandra farm just outside of Nowra at Tapitatllee.

First on the course was Robyn Smith running in the O’50 6km run. Although a little under done on the training front Robyn wasn’t phased and she finished highly satisfied with her effort.

Next up was the Open female 10km race that included the O’35 event and Rona Macniven ran a big course PB to win her age group.

While the ladies were still running the Men’s Open & age groups 10km event started. Karl Baddeley, nursing a glute injury started conservatively and finished strong to be first AE man home with a course PB. James Costello was not far behind having been in front of Karl for most of the event, followed up by Darren Purcell’s debut performance over this distance on the course and Mark Gregory running a PB to bring the team home with a well earnt 2nd place.

Last event that the club were involved in was the U16 girls 4km. Ruby Madden started strong and settled in 7th place a position that she held for the duration of the event. Last year Ruby ran 16.24 and she smashed this running 15.15 this year.